Listen to the Latest Podcast EpisodeYes, Most Bloating Is Normal…But Here’s What To Do If It’s Excessive

We’ve got that new new for you this week with this plant-based Monday feature. Say hey to the wonderful Jerusalem Artichoke. Have you used them? Heard of them? First things first, they’re not actually artichokes and they do not come from Jerusalem. So what’s the deal with this mysterious little tuber? 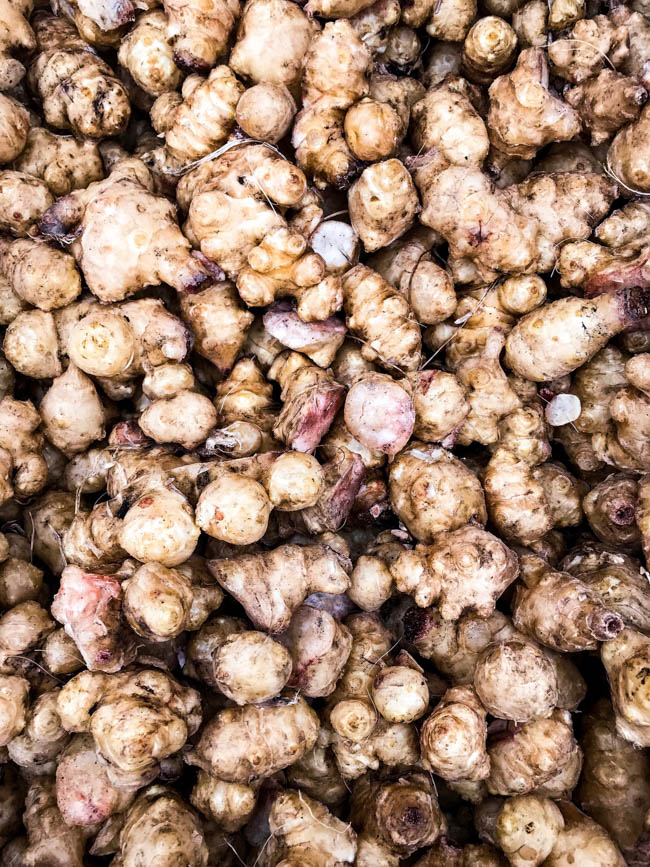 Jerusalem artichokes are a tuber that actually look more like ginger root than anything else. They come from the edible root of a flowering plant that look like little sunflowers. They belong to the sunflower family and are often referred to as sunchokes. Jerusalem artichokes originated in North America and have gained a lot of popularity in European countries.

Nutritionally, Jerusalem artichokes don’t disappoint. They are a great source of iron and also a good source of thiamin and potassium. Another key factor about Jerusalem artichokes is that they are low on the glycemic index. They won’t cause significant blood sugar spikes, which may be useful for people with diabetes. The fiber content of these veggies will also help to slow the rise of blood sugars and promote a healthy GI tract.

Speaking of GI health, Jerusalem artichokes are a good source of prebiotics. They contain a fiber called inulin. The bacteria in the gut converts inulin into short chain fatty acids, which results in a number of health benefits!

These tubers have a sweet and nutty flavor similar to jicama. They taste great raw or roasted. They are in peak season October through March, so be sure to check for them at your local market before they’re gone. To buy, choose smooth, unblemished Jerusalem artichokes that don’t have many bumps. To store them, keep in a cool, dark, and well-ventilated area similar to where you store potatoes. Most Jerusalem artichokes will last anywhere from 1-3 weeks if properly stored.

We love to keep it simple by chopping and roasting them, with some salt and pepper, but here are some other wonderful recipes to try:

How many of you have tried Jerusalem Artichokes/Sunchokes in the past? Try them out before they’re gone & let us know what you think in the comments below!

This website uses cookies to improve your experience while you navigate through the website. Out of these cookies, the cookies that are categorized as necessary are stored on your browser as they are essential for the working of basic functionalities of the website. We also use third-party cookies that help us analyze and understand how you use this website. These cookies will be stored in your browser only with your consent. You also have the option to opt-out of these cookies. But opting out of some of these cookies may have an effect on your browsing experience.
Necessary Always Enabled
Necessary cookies are absolutely essential for the website to function properly. This category only includes cookies that ensures basic functionalities and security features of the website. These cookies do not store any personal information.
Non-necessary
Any cookies that may not be particularly necessary for the website to function and is used specifically to collect user personal data via analytics, ads, other embedded contents are termed as non-necessary cookies. It is mandatory to procure user consent prior to running these cookies on your website.
SAVE & ACCEPT
Accessibility by WAH